From the outset I approached each photograph in the same methodical way: picking the flower from my father’s garden, placing it in my mother’s vase on the dining table in front of the window, measuring the light that fell on its face with my hand-held meter, loading the into the camera and finally exposing the film. I must have repeated of times. There was something reassuring, especially after my mother fell ill. By then I could do it automatically and without thinking. Each flower I picked was and each photograph I made was a resurrection. 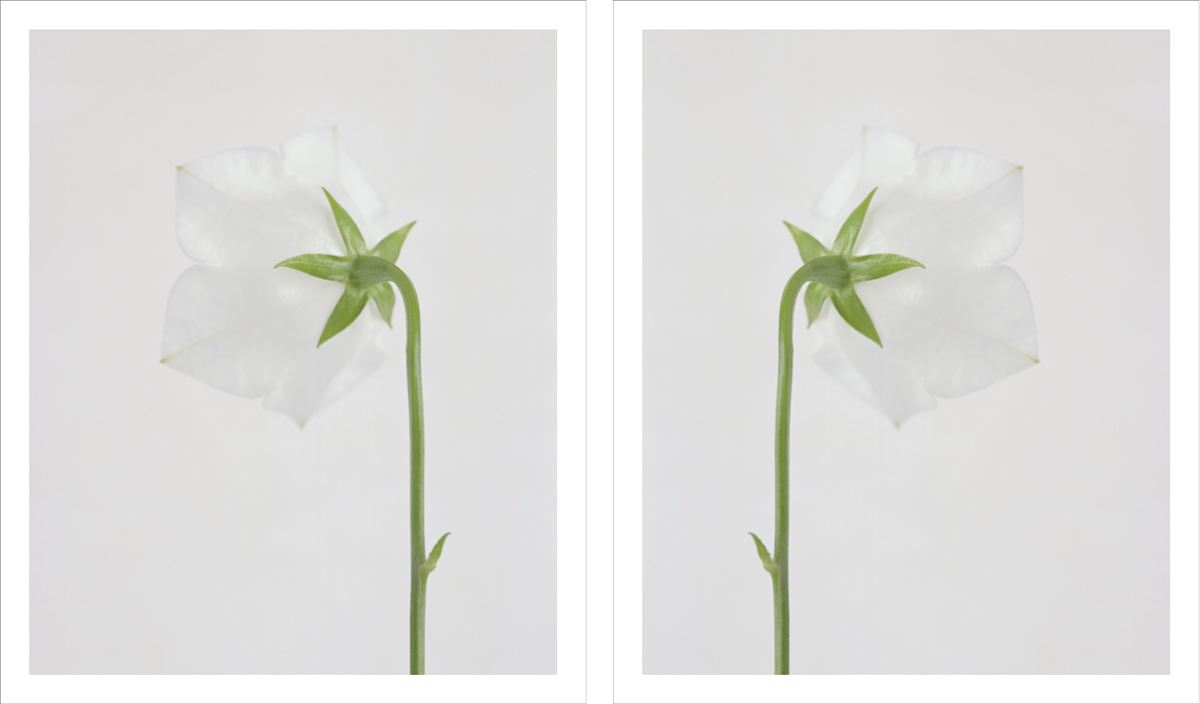 is a work of 5 mirrored pairs of photographs.

In  John Askew’s series Flower, there are five pairs of mirrored images, each depicting a simple, green-stemmed white bloom. The white Campanula is framed closely against a white background. And every image is the same: the flowers have turned their backs on the camera and each other, their white petals almost indistinguishable from their surroundings. They are pictures of a flower in which the flower is almost not there at all.

It is this self-conscious evasion that immediately suggests Askew’s images have a distinctly individual agenda. The simple device of depicting the flower with its head turned away from the viewer anthropomorphises the bloom in an unexpected way. In comparison to the long tradition of depicting flowers as sexualised objects – so explicit in Robert Maplethorpe’s work for example – Askew’s Flower appears modest, even demure. Yet it has a palatable, silent strength.

Like all of Askew’s work, Flower gestated over a protracted period of years. In this sense, the concept of time-lapse is fundamentally enshrined at the very heart of the artists working method. Askew often realises his series through the editing, re-photographing or recontextualising of images he has taken up to 20 years earlier. Even when not working at such a remove from the images’ moment of origin, Askew consciously delays closure, working and reworking the images in an attempt to dislocate them from their source.

The desire to stress the photograph as an autonomous object distinct from its referent emerges from Askew’s preoccupation with the perennial conflict between the tangibility of photography’s promise to represent memory and its inability to do so. Through different devices, he has attempted to emphasize the status of photography as a chimaera born of an explicitly mechanical process, a false promise of preservation that plays on our emotional reflexes.

The universality of this emotional reflex is underlined by the very fact that, despite his work’s agenda, Askew’s series always begin with material with which he has a close personal association. The choice of from this series came from the artist’s realisation that his most elemental idea of a flower was the which his father grew in his garden. The period of development of the series coincided with a time of serious illness for his mother. Askew made hundreds of images of the , at first as reassurance in the face of uncertainty. But even this deeply emotional association became the beginning of the process of dislocation. The repetition moved steadily from its original impulse towards a mechanical expression of the beauty promised by concealment.

In conversation, Askew is fond of recounting a Jewish legend. The legend describes how each millennium God sends an angel to earth to deliver a message to his people. Preparation for this mission takes countless years, the journey itself is long and complicated. It is so arduous that most of the messengers get lost on the way to earth, and those who finally reach their destination have forgotten what it is they were supposed to say. Askew posits this as a metaphor for photography in general – the beautiful, magical messenger that is ultimately empty of the meaning we expect it to bring – but it is especially pertinent for his own work.

The painter Luc Tymans observed that if they are to have an effect, must have a tremendous intensity of silence. Flower manages to open a silent space which gives rise to a myriad of associations. Flower could easily be a meditation on beauty, on death and resurrection, or even on humankind’s increasingly radical interventions in nature. But Flower is essentially a paradox. It suggests all of these things through their explicit absence. It is an expression of the fact that the photograph is not so much a repository of memory as a screen onto which we project associations in an attempt to fill its emptiness. It is the embodiment of photography’s withholding in the face of our desire for meaning.

Simon Morrissey is a curator and the director of Foreground, a commissioning arts organisation he founded with Tabitha Clayson in 2007. Based in Frome, Foreground produces both temporary and permanent artist commissions in the South West of England, exploring the relationship between art and its diverse settings and audiences. In 2008 he established WORKS|PROJECTS, which represents a distinctive stable of British artists and initiates projects that develop critical and commercial platforms for emerging artists in the region. Simon has worked as an independent curator since 1999. His curated projects have been commissioned by leading public institutions and commercial galleries including The British Council; Hauser Worth, London; Arnolfini, Bristol; The Bowes Museum, County Durham; Forma, Newcastle/London; Chapter, Cardiff; and Spike Island, Bristol.

This essay appeared in Portfolio Magazine 2001 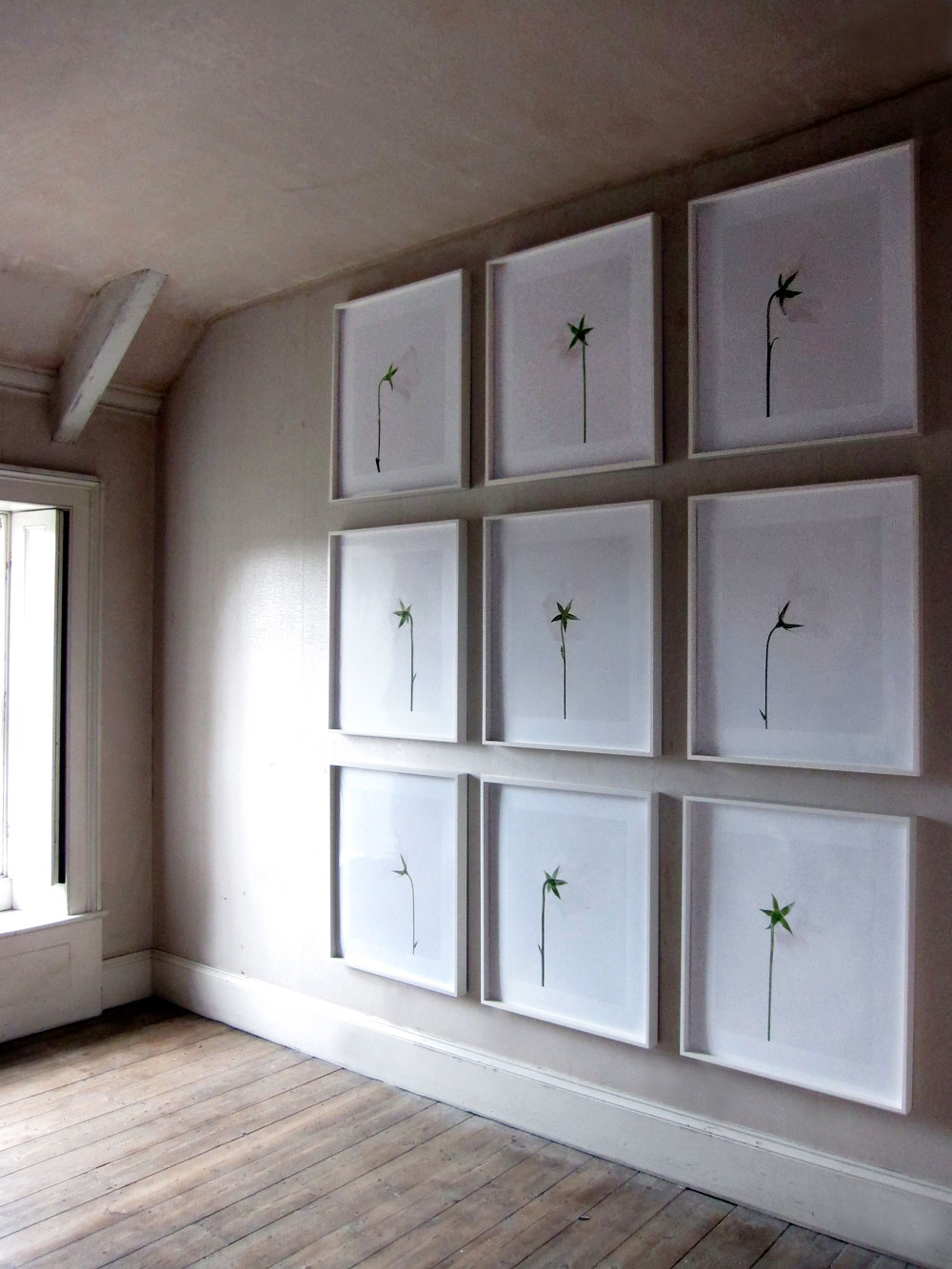