No matter how you twist it, photography has something to do with resurrection. Presence is a single work that attempts to foreground an encounter with another person and the irreducible strangeness of photography. 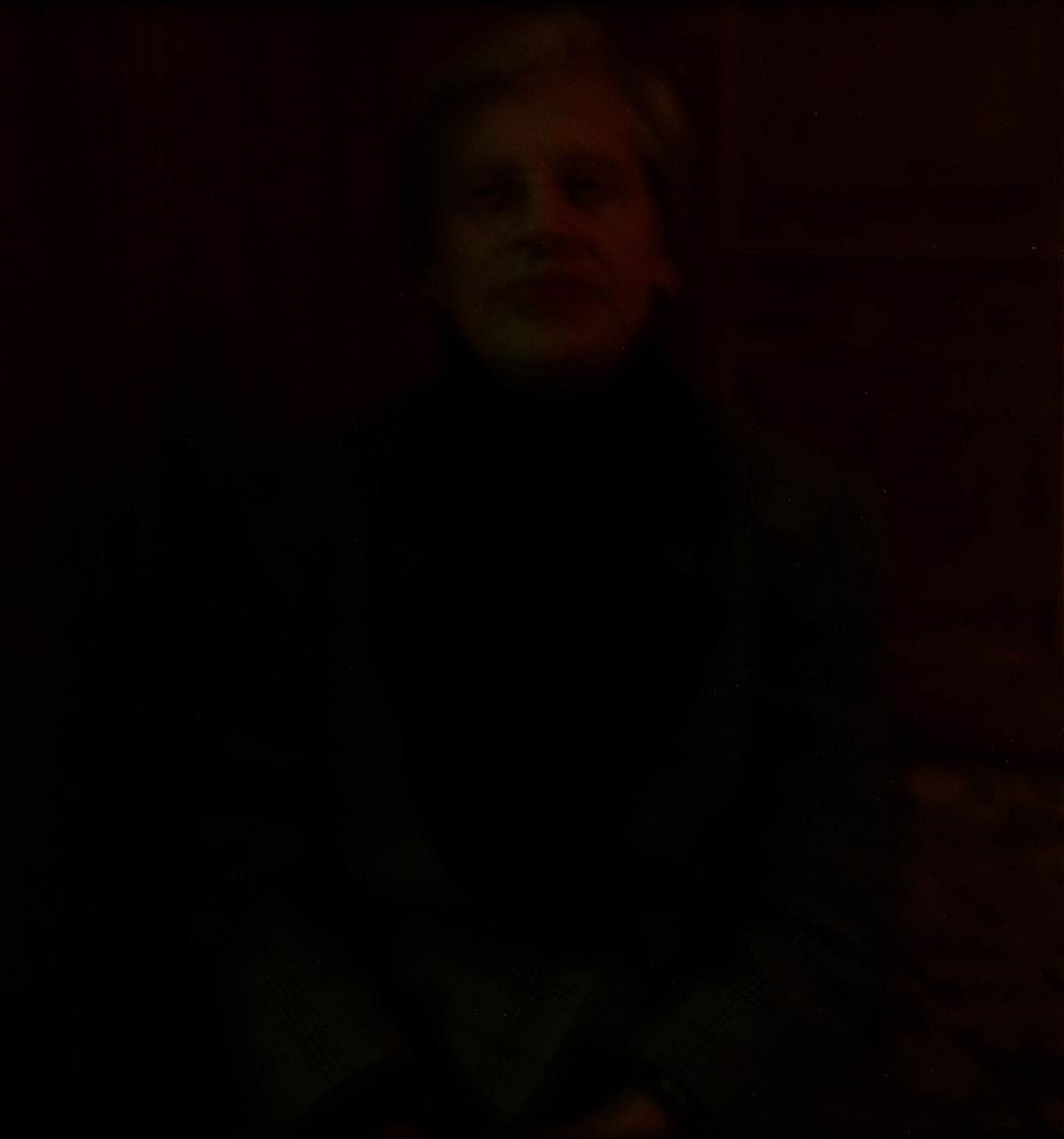 Treatise on Living by the Younger Generations (extract)

… The work Presence reveals or rather conceals a spectral figure sat in near-complete darkness. As Simon Morrissey has written, one of Askew’s recurring preoccupations is “the beauty promised by concealment”. This is a work printed a full eighteen years after the exposure was taken, in 1996. An ultra-long exposure requires us equally to bear an extended gaze to register the image; and the knowledge that a new work is of, and about, a now-historical subject complicates our gaze. Though this work is of interest precisely like all of Askew’s work, it is about the ‘now-historical’, that is, how the ‘now’ is historical. Resembling Robert Mapplethorpe’s late, great self-portrait, It is filled with a quiet intensity that could be paraphrased as a sense of foreboding or a shattering stillness. As the title implies, such works refuse the usual chains of associations that photographs inspire or allow. Askew invites us to view them phenomenologically, in terms of their sense of presence, rather than hermeneutically as objects for speculative ‘interpretation’.

Looking at Presence, we are required not merely to adjust our eyes to the negligible visible light but to imaginatively step inside it, to ‘break the fourth wall’ by immersing ourselves within it completely. In such works, it is more transparently obvious how Askew’s ambitions for photography are like those that previous generations set aside for modernist painting. Presence is distinctly similar to Rothko’s late black-on-black works, quite obviously, in its severe tonal restriction, symmetrical composition, and pared-down simplicity. It was once said of these works that viewers had to look at them for twenty minutes or not at all: that without our eyes adjusting to the light levels of the work, and to the temporality of the work, it could not function at all. Put another way, we suspend disbelief fully, and are engulfed into the image, or move on. Rothko imagined that his works would encompass us within them, and overpower us, as if they were images of the deity as seen in Judaism. His objective was not merely to create objects on a particular scale, but rather that his objects could not be readily assimilated into our consciousness. Without any obvious ‘point of closure’, narrative or otherwise, we are required to adjust ourselves to them. Askew follows this line of reasoning. His most potent works resemble objectified versions of George Bernard Shaw’s maxim about the importance of the ‘unreasonable man’. Namely, the reasonable man is one who adapts himself to the conditions that surround him; the unreasonable man demands that his surrounding conditions adapt themselves to him. These, in other words, are unreasonable objects, or better put, insubordinate objects that require us to remodel ourselves, in the light of the vision of the world they present.

Alistair Robinson is Director of Northern Gallery for Contemporary Art, Sunderland, having worked in the national collection of photography at the Victoria & Albert Museum, and the National Museum of Photography. He has authored and edited monographs about artists from Dan Holdsworth to David Harrison and is co-author of the Routledge Guide to Museum and Gallery Studies (2018).

This is an extract from the essay that introduces the book We published by Kerber Verlag in 2019 to accompany John Peter Askew’s exhibition at the Northern Gallery of Contemporary Art, Sunderland, UK.